Food Recipes Hub > Drinks > Turkish Apple Tea Recipe
Print Recipe
Turkish Apple Tea Recipe
Turkish tea is a favorite drink in Turkey. One of the souvenirs that tourists often bring from Turkey is Turkish tea. In this article, you will learn how to choose a type of tea and where to buy it while on vacation. We will also tell you about some traditions, for example, how to properly brew Turkish tea. Finally, we will introduce you to the best brands of tea from Turkey. In our time, tea in the provinces and cities in Turkey is used everywhere. Turkish tea has long been an integral part of everyday life and has firmly entered the national culture, including modern Turkey. Offering tea to an interlocutor or a store visitor is part of the unwritten code of conduct for a cultured person in this country. It is believed that in this way you show special attention and even a friendly disposition to another person. Few of us know that in large offices of Turkish companies there is a special employee who not only constantly prepares tea, but also carries it on the tables of an employee of an office or a large store. In other words, Turkey and tea are practically inseparable from each other. Few people know that tea was previously brought to Turkey from the east. And only in the 19th century, several tens of tons of tea seeds were brought to the eastern country from Georgia, which served as the basis for the subsequent cultivation of Turkish tea. Today, endless tea plantations stretch in the mountainous area near the Turkish city of Rize. The locals learned how to select this evergreen shrub and gradually took a leading position on our planet in terms of consumption and are amongthe TOP 10 countries producing various varieties of tea. Turkish tea has several qualities that make it in its own way a unique drink. At the same time, the opinions of experts about the taste characteristics of the drink are very contradictory. Most of them approve of the fact that in the process of tea cultivation, the Turks use a minimum amount of various inorganic fertilizers and pesticides. On the other hand, Turkish tea is practically it does not contain caffeine. Therefore, after its use, there is no increase in the tone of the body. In addition, the complete absence of tips completely deprives this tea of any flavor. Therefore, strong, undiluted with water, and weak tea differ only in color and a little taste. In other words, adjectives such as aromatic and invigorating can not be attributed to Turkish tea. On the other hand, it is scientifically proven that Turkish tea perfectly quenches thirst and quickly cools the body in hot weather, while not causing heart palpitations and not increasing blood pressure! Once in a store in Turkey or in an online store, you can see a large number of different varieties of Turkish tea Çaykur on sale. Therefore, there is a sense to run a glance through the product line of this company and understand how the boxes differ in color, and most importantly - their contents. First, we will present four varieties (brands) of black tea, they practically do not differ in price and consumer quality. properties. However, the manufacturer focuses your attention - any of the varieties is grown without the use of any types of fertilizers. And the taste and aroma of each of the presented teas will, of course, be their own. Moreover, on the shelves of stores in Turkey, you can find five-kilogram packages (!) of this Turkish tea Çaykur. The last twenty years, the shelves of shops in the tourist area are filled up boxes of instant powdered tea. Apparently, while on vacation, tourists finally become stupid, since they rely on the perfection of Turkish technology, which allegedly, she came up with an alchemical method of turning tea leaves into a powder that does not leave a known tea residue in the cup. It should be borne in mind that the powder grades turkish tea is a solid chemistry of sweeteners, artificial taste imitators and creepy-looking dyes (look at the photo slides). Drinking such fake tea is harmful! Remember-pomegranate (Nar Çay) or apple (Elma Çay) powdered Turkish tea can not be bought in any case. Drink this tea, as a rule, in the off-season, to replenish vitamins in the body, as well as during all sorts of colds. During this period, apple tea is brewed from dried or dried apples (Kuru Elma Zayı) and of course it is drunk hot. And in the summer, this tea is drunk mainly to quench thirst, drink most often cold and brew as a rule, from fresh apples. And, of course, each hostess has her own composition of this tea and even the method of brewing. But the classics of the genre and the basis is: Apples and cinnamon. Further options are possible. I will give a recipe without proportions, the proportions in such recipes can only be approximate, because everyone chooses for himself what he wants to feel more in the tea-the aroma of apples or mint, pepper or cinnamon. Try, experiment, create your own taste of apple tea. slices of dried or dried apples black pepper peas cinnamon (in sticks!) a few leaves of dried mint.if desired, you can also add cloves ginger orange zest or lemon.* Some housewives also add rose hips and hibiscus As I wrote above, for apple tea, take dried (in the sun) , dried or fresh apples. How to brew such tea.

this is to add all the ingredients to a jug, pour boiling water and let it brew, under a lid or towel. This method is most suitable for fresh apples.

this is to boil the water, throw in all the ingredients, turn down the heat, cover and cook for about five minutes. Let it brew again, strain and pour into cups. But if you want the spices to reveal their flavor brighter and stronger, then do this: In cold water, add the peppers, cinnamon, cloves (if using) and bring to a boil. As soon as it boils, turn down the heat, add the apple slices, zest and ginger (if using), cover and cook for no more than five minutes, then remove the tea from the heat and add the mint, cover and let stand. After all this, strain and pour into cups. You can also add a slice of apple to each cup.

It is best not to use sugar or take honey, not sugar. And if the apples were dried with the use of sugar, then definitely neither honey nor sugar is needed. My comments: I just happened to have dried apples. I did a little. The tea is delicious, much better than what is sold in Turkey in boxes! This Apple tea is good for both children and adults! Hot, fragrant! It will be very appropriate in cold weather, will warm, and in summer it can be cooled and also enjoy it! And tasty and healthy! All ingredients are completely arbitrary. 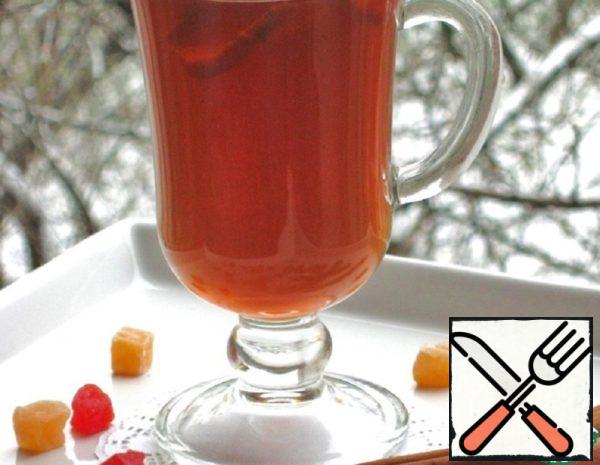